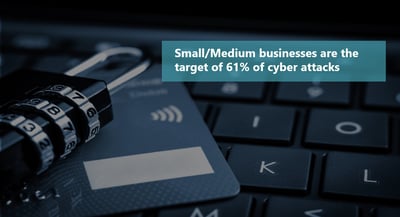 Cyber threats are real and they're local.  Major corporations like Marriott make the big headlines, but too many smaller businesses and institutions think they're "under the radar".  Attacks are widespread and they're automated.  The average firewall is getting hundreds of thousands of intrusion attempts per month, over 50 ransomware attempts, and twelve phishing attempts.   All it takes is ONE user clicking on ONE wrong link and a lot of damage can be done.

Recently Cape Cod Community College was hacked for over $800,000.   In this particular case, a user opened an email that looked like it was from another college, and the user didn't have any suspicions at first.  What they didn't know, was that malware targeted their financial transactions.  The college worked with the FBI and were able to get some of the funds back, but this is actually quite rare.  The college is beefing up their cybersecurity protection now, but waiting until disaster strikes will help next time, but can't undo the damage incurred in this attack.

Working with hundreds of local businesses, we've seen a big increase in the number of threats this year, and we're advising everyone in our community to review all the risks, and make informed decisions about the level of protection needed.  The protection in place over the years (Firewall, Antivirus, Security Patch updates) just isn't enough to protect against the latest threats.  More tools are available to SMBs and the first step is to understand the risks involved.  The level of protection you had in the past is not enough.

"Cybercrime is now larger than all other forms of organized crime put together"  Michael George, Continuum Navigate.

A business class firewall is one of the most important layers of protection against intrusions, and we recommend Sonicwall, recognizedas the leader for SMB protection, but that's just one layer of protection.

Globally, the SonicWall Capture Threat Network, which includes more than 1 million sensors across the world, recorded the following 2018 year-to-date attack data through October 2018 including  a 117 percent increase in the number of ransomware attacks.

We want everyone in our community to fully understand the changes in the threat landscape and what can be done to help better protect your business.  Call us to schedule a time to review your current level of protection so you can understand  the protections you have in place, and where there may be gaps that need to be considered.  There is no such thing as 100% security, but understanding the risks and making an informed decision about the level of risk you can tolerate is critical for protecting your business.