eMail Delays in the "Always On" World 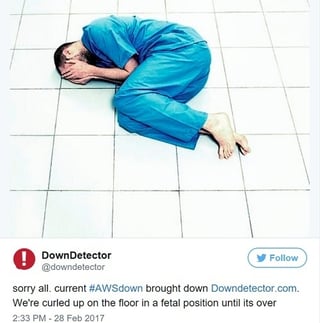 ern technology enables us to accomplish so much, but when there's a disruption, we're reminded of our dependence, and it's painful!  Last Thursday and Friday, many users were affected by delays in sending and receiving emails.   The systems at Rackspace, one of the leading cloud providers in the world, became overloaded and disrupted services for many users, including a number of Ekaru clients.

We have been tracking the situation closely, and spoken to many of our users, and the situation was mostly resolved on Friday.  We've provided updates on our website and social media pages, and we're always available by phone for questions.   Thank you for your patience and understanding!

None of the leading providers are immune from disruptions and downtime.  Office 365 had three disruptions in June, and Amazon Web Services had a major outage in February.  In an twist of irony, Down Detector, which monitors web outages was itself down as a result of the Amazon outage.  Although Amazon, Rackspace, Office 365 are known for excellent up times, there is always the chance of an exception.

Here is a summary from Rackspace regarding the timeline that affected users:

More analysis is underway, but for now, the important thing is that performance has been restored.

We know how stressful events like this are for all users, and we are here to help in any way we can, but in some ways this is the technology equivalent of being stuck on an airplane at the gate with a mechanical delay or weather delay - sometimes it's just out of our control!  Work was performed around the clock to restore services.