Cisco Systems Inc. opens a new research center here Friday, a 430,000-square-foot, three-building complex that brings many of the company's scattered New England operations to one campus in this town 25 miles west of Boston.

It isn't yet the 10-building complex envisioned in the original plan. And it's later than expected, since recession-battered Cisco temporarily suspended construction in April 2001. 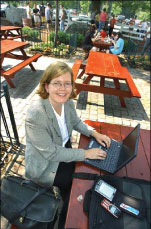 But those in the technology corridor that clings to Boston's two ring roads, Route 128 and Interstate 495, are grateful for any signs of economic life. The area, despite a well-educated work force that cuts its teeth at companies like Wang and Digital Equipment, has shed thousands of technology jobs over the past three years.

"The good news is that the plans are going forward, as opposed to ending up on the scrap heap," said Chris Anderson, president of the Massachusetts High Technology Council, an industry group.

Still, no one is heralding the center as a confirmation of a resurgence in one of the nation's biggest tech hotbeds, San Jose, Calif.-based Cisco, the No. 1 maker of equipment that directs Internet traffic, is simply consolidating other employees around the area, not hiring new ones.

It's representative of what's happening across the region: Some companies are investing again, but mindfully, and with an eye toward cost-savings and preparing to pounce when the market really recovers.

What they aren't doing much is hiring.

"That's very much in line with the way technology companies are looking at growth," Tony Badman, who founded a networking and support group for laid-off technology workers in the area, said of the Cisco facility. "They're being far more conservative about it. And they have to be."

In recent months, investors have regained their confidence in technology, bidding up the Nasdaq index more than 20 percent since February. Badman says members of his group are having a somewhat easier time finding jobs.

But not much. Membership in the group, called 495NSG (as in, "Interstate 495 Networking Support Group") has leveled at about 2,000, but the group is nowhere near its goal of rendering itself unnecessary. A recent membership survey reported that about half have been looking for work at least nine months.

"Companies are looking at a little bit of steady growth, but the increase in the number of jobs required now is incredibly small in relation to the number of people who got laid off from the sector over the last few years," Badman said.

Many firms are investing in capital projects but not yet people, Anderson said. In nearby Chelmsford, Mass., Brooks Automation recently opened a new "cleanroom" manufacturing facility to make parts for electronics manufacturers. But that too consolidated local operations.

In another nearby town, Westford, Mass., Ann Westerheim's six-person technology consulting firm is also in a holding pattern. When it made its last hire over the winter, 200 people applied for the position.

There are some bright spots. All that equipment companies splurged on int he late 1990s years ago is wearing out.

"Now some of that stuff is getting old and running out of gas," she said. "Hard drives are getting full."

Cisco will use the new facility to conduct research on its core routing and switching products, as well as in other areas like security and voice technology.

Badman, of 495NSG, says that after the delay, he's simply glad to see Cisco moving forward.

"Hopefully, what it says is that (there will) be another percentage of jobs needed at that facility next year," he said.

Back to Ekaru in the News